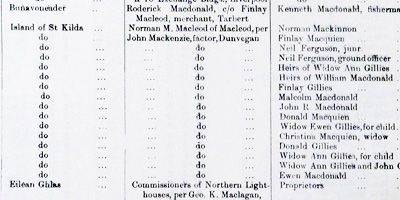 NRS has released valuation rolls from 1930 on ScotlandsPeople. The last remaining households left on St Kilda are listed in the newly-released records, providing a snapshot of the remote island community shortly before evacuation on 29 August 1930. The 1930 rolls join nine previous releases on ScotlandsPeople, the family history website of the National Records of Scotland, spanning 75 years between 1855 and 1930, and bringing the total of index entries available to researchers to over 108 million.

St Kilda was Britain’s remotest settlement, lying more than 40 miles west of the Outer Hebrides off Scotland’s north-west coast. By 1930 the community was fragile. There were only 36 islanders left: 13 men, 10 women, 8 girls and 5 boys. They occupied 10 of the 16 single storey cottages rented from the heir of landowner, Norman MacLeod of Macleod, who lived at Dunvegan Castle on the Isle of Skye. Learn more about the last islanders of St Kilda on the ScotlandsPeople website and about the island’s remarkable history in a special feature drawn from the NRS archive collection.

The newly-released Valuation Rolls include 2,550,479 indexed names and addresses for every owner, tenant and occupier of property, and a record of its annual rent, throughout Scotland. By comparison there are just over 1 million in the first rolls in 1855 and 2.1 million names in 1925. Between 1855 and 1930 Scotland’s population grew from over 3 million to over 4.8 million.

"I welcome the latest addition to the amazing resources that National Records of Scotland makes available so that people across the world can discover more about Scotland’s story through the history of families and communities."

“The sixteen householders listed on St Kilda in 1930 are just a few among more than 2.5 million names, but they stand for a traditional way of life that was about to end when the remaining islanders were evacuated. The Valuation Rolls we are putting online now span three quarters of a century from the earliest in 1855 and allow people to discover more about Scots almost twenty years after the Census of 1911. They are an invaluable resource for researchers to explore when investigating family and local history. The latest release is part of the commitment by National Records of Scotland to progressively improve access to the key records that researchers want."