Originally from Asia, the almond has been grown in Britain since the 16th century. The seed is used in confectionery, baking and as gin flavouring. It also provides almond oil for use in medicine and as a skin and hair conditioner. Since ancient times it has been linked to the goddess of fertility, Cybele. As a result for centuries they have featured in the celebrations surrounding birth and marriage. For example almonds were once scattered in front of newly weds leaving the ceremony.

Other accounts refer to sugared almonds being presented by the godfather and the godmother to guests after a christening ceremony was complete. Today they are occasionally seen on wedding cakes or they may be given out by the bride and groom as a favour or memory to special guests.

In the same plant family as roses, almonds are a relative of the native Scottish bird cherry or gean. This tree Prunus avium, which is still grown as an ornamental may have been what the Edinburgh poet and author Robert Louis Stevenson (1850-1894) was referring to in his well known work A Child's Garden of Verse 1912.

Foreign Lands
Up into the cherry tree
Who should climb but little me
I held the trunk with both my hands
And looked upon foreign lands.

He was clearly fond of plants and gardens writing of both.  For example in 'Memories and Portraits' we find in 'An Old Scotch Gardener' the line 'Foxgloves he not only spared but loved'.  He is also reputed to have said:

Do not judge each day by the harvest you reap, but the seeds you sow. 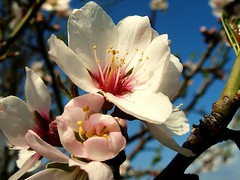 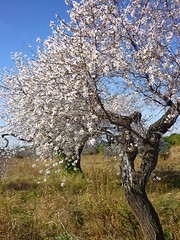