Apples have featured in rituals and mythology since the time of the Ancient Egyptians, when they were used as temple offerings. To the Ancient Greeks they were a symbol of reproduction and youthful beauty. Gaia the goddess of the earth is said to have presented Hera the protectress of marriage with a tree covered in golden apples upon her marriage to Zeus. Its fruit was said to give eternal youth.

To the Celtic peoples the tree represented everlasting life and knowledge; Merlin is said to have taught under an apple tree. They also have deep Christian meaning, with the story of Adam and Eve and the tree of knowledge in the Garden of Eden and as such they often appear in religious art as symbols of temptation. By the Middle Ages apples were undoubtedly deeply embedded in European cultural beliefs. This fact combined with their sweet flavour and colourful appearance meant they were closely associated with love. From classical times and through the Renaissance Psyche, the beautiful damsel who eventually married Eros the Greek god of love (Cupid to the Romans), is often depicted carrying a basket of apples on her head as a symbol of fertility. However she also has a dark side as she is the goddess of the soul, which associates her with death.

The garden contains two dessert apples. The first, 'James Grieve', was specially bred to suit the Scottish climate and is named after James Grieve. He was a respected Edinburgh Nurseryman and plant hybridiser, born in Peebles c.1840. Grieve went to work in a local nursery at an early age before becoming an apprentice at Stobo Castle. Following this he moved to Edinburgh to breed hybrid pansies for Messrs Dickson and Co. Edinburgh. Later he set up his own nursery business with his two sons specialising in violas, pinks, carnations and top fruit, especially apples. He died in Edinburgh in 1924. The cross for the cultivar which bears his name was between 'Potts Seedling' and 'Cox's Orange Pippin' shortly before 1893.

The second cultivar in the garden is 'Worcester Pearmain' which was one of the best varieties formerly grown in the Clyde Valley Orchards. It originally occurred as a chance seedling in a nursery on the banks of the Severn near Worcester c. 1870. 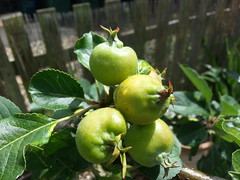 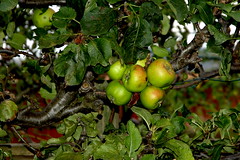