Native to Britain and western Europe foxgloves are one of the most common and easily recognised wild flowers. Distinct and attractive, they have been cultivated or allowed to naturalise in our gardens for centuries. In the past they had several vernacular names which associated them with fairies: fairy caps, fairies thimbles or fairies glove. More sinisterly they were also once called witches gloves or dead men's bells.

Foxgloves have been used in folk medicine for centuries, but it was not until 1785 and the work of the English physician Dr William Withering (1741-1799), that their action on the heart was understood. This led to an extract of the plant being used to treat heart disease; as a result they were grown commercially for drug companies right up until World War Two.

The plant has also been a source of inspiration to many Scottish poets, authors, song writers and musicians. Marion Angus (1865-1946), now recognised as an important figure in Scottish literature, wrote of them. Born in Sunderland, Marion moved with her parents to Arbroath aged 11, where she attended secondary school. Despite being unable to continue her education, she was well educated and widely read. After her father's death the family moved to Cults, Aberdeen where she produced some of her finest work. Later in life she lived in the Scottish Borders and on the west coast before returning to the north-east.

Angus once said: "I would fain give voice to the Scotland's great adventure of the soul. I never shall;"

How wrong she was. A recent resurgence of interest in her work has resulted in her being described as one of the greatest lyrical poets of the 20th century. With works like 'Singing Water' from 'Sun and Candle Light' (1927) it is easy to see why she and her work should be better known.

Sweet Secret - I shall never know,
Though seas run dry, and suns turn cold,
How many purple foxgloves grow
This summer by the ruined fold.

Somehow she captures the mystery and majesty of this simple plant, so often seen adjacent to ancient ruined buildings and signs of habitation where its purple bells hang like a living lament. Perhaps this is why it has been taken overseas by immigrants, to be planted as a memory of home. 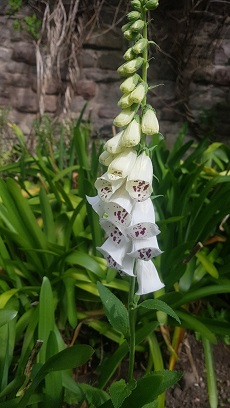