The pear was dedicated by Ancient Greeks to goddess Hera who represented women, especially wives and fidelity in marriage. Perhaps because of the feminine shape of the fruit and the sweet flavour they have also been associated with early fertility cults.

Throughout the centuries and within living memory pears have be seen as a 'Tree of Life' until recently many families planted a pear tree to celebrate the birth of a girl. How good it would be to renew that tradition.

With so much mythology surrounding them it is no wonder that they feature in the folklore and fairy tales of several European countries, interestingly these stories highlight the wisdom and importance of women in society.

Pears are also associated with remembrance and death, it was thought unlucky to bring the blossom into the house, as it was said to hasten a family bereavement.

In the garden they are growing as cordons against the back wall. A sight which was clearly familiar to Adam Smith (1723-1790) the Scottish Economist born in Kirkcaldy and renowned for his role in shaping the modern science of economics, with his famous work the 'An Inquiry into the Nature and Causes of the Wealth of Nations' (1776), which includes the importance and value of growing fruit.

"In Great Britain, and some other northern countries, the finer fruits can not be brought to perfection but by the assistance of a wall. Their price, therefore in such countries must be sufficient to pay the expense of building and maintaining what they cannot be had without. The fruit-wall frequently surrounds the kitchen garden, which thus enjoys the benefit of an enclosure which its own produce could seldom pay for". 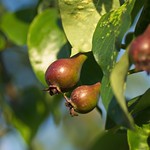 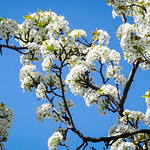