Rosa canina is native to Britain, Europe and parts of western Asia. The scented flowers are very variable in colour and have resulted in several cultivated hybrids. These include Rosa canina (Abbotswood) which was found in the garden of Irish engineer, Harry Ferguson, who founded the tractor company which made the famous 'Little Grey Fergie' which changed the face of Scottish agriculture forever.

Robert Burns (1759-1796) also makes over 60 references to it in his many songs and poems as it was clearly one of his favourite flowers.

Shrouded in mythology and strongly linked to the Christian faith, the dog rose is symbolic of purity, love and marriage, it was also linked to the prediction of death, as it was once thought that if you were ill and dreamt of roses you would die!

The bright red hips which are produced in the autumn were once used to make medicinal syrup; they were also thought to give protection from sorcery and witches. This is perhaps why it often features in medieval and gothic architecture and works of art, especially, the wood and stone carving found with ecclesiastical buildings.

On the authority of the Court of the Lord Lyon the rose is recorded in the Public Register of All Arms and Bearings in Scotland and in the Matriculations of Arms of Chiefs as being the official plant badge of the Clans Borthwick, Erskine and Lennox. 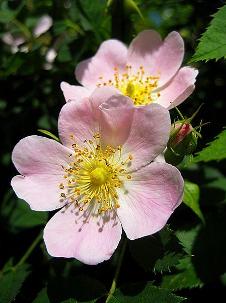 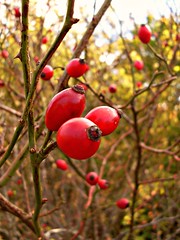