Not surprisingly the Rowan is at the heart of Scottish plant lore, associated with all areas of lives and culture. It has several practical uses - dyes, food, medicine. Our elders believed a heavy berry crop in autumn foretold many births the following year. It was believed to protect against evil, the devil, witches, death and disease; hence it was often seen planted near the house. Even today in parts of west Scotland foresters and gardeners refuse to cut the plant down.

Many of the nation's famous poets and song writers have written about its qualities including Robert Burns. However perhaps the best remembered work is that of the Scottish song writer Lady Carolina Nairne (1766-1845), a Jacobite laird's daughter, born Gask, Perthshire.

The Rowan Tree
Oh! Rowan Tree Oh! Rowan Tree, thou'lt aye be dear to me / Intwin'd thou art wi mony ties o' hame and infancy. / Thy leaves were aye the firt o' spring, the flow'rs the simmers's pride; / There was nae sic a bonny tree, in a' the countryside. / Oh! Rowan Tree.

Renowned Orcadian writer George Mackay Brown (1921-1996) wrote about it in his acrostic work 'Lullaby for Lucy' (1980), celebrating the birth of Lucy Rendall of Rackwick, the first baby born on the island for 32 years. This was set to music by English composer Sir Peter Maxwell Davis, who had adopted Orkney as his home.

Lullaby for Lucy
Let all plants and creatures of the valley now / Unite
Calling a new / Young one to join the celebration.
Rowan and lamb and waters salt and sweet
Entreat the / New child to the brimming
Dance of the valley / A pledge and a promise.
Lonely they were long, the creatures of Rackwick, till
Lucy came among them, all brightness and light.

The fruits were mixed with madder to make traditional black and orange dyes for use in the manufacture of tartans and tweed. They were also made into jelly, a fermented punch and medicine for whooping cough. Also the plant badge of several clans including Clan Scrimgeour, Clan Wigan and Clan MacLachlan, it is no wonder with such strong cultural links that the seed was taken to other parts of the world by departing Scots who hoped to grow a reminder of home in foreign lands. Next to the thistle it is undoubtedly one of the best living emblems of homecoming. 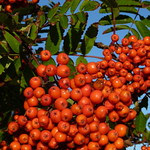 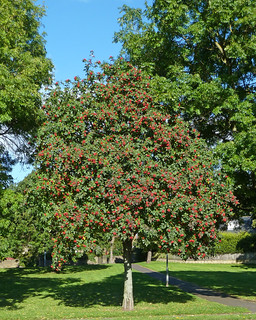