First listed by the English herbalist John Gerard (1545-1612) in 1597, this winter-flowering species is found naturally from Bulgaria to Iran and north-east Turkey, where it was once used as a swine fodder.

The petals were used in tea and a snuff, which was thought to cure baldness, was prepared from the roots. In ancient Greece the plant was associated with the goddess Hecate the protectress of enchanters and witches. It was also used as a contraceptive and love potion and may also have been used in midwifery during confinement.

The best of the hardy cyclamen, it was introduced from the eastern Mediterranean prior to 1600. It is often referred to as sow bread because the corms looked like small loaves and were thought to have been favoured by pigs in the wild.

According to the Greek philosopher Theophrastus (c.371-c.287 BC) it was used to excite love and voluptuous desires. It was also valued by midwifes, although why is unclear. Under the doctrine of signatures it was associated with the stomach, a tincture 'ointment of arthainta' was prepared from the corms and used to treat worms in both adults and children.

In ancient Greek mythology sowbread was associated with the goddess Hecate, the queen of ghosts who was accompanied by hell-hounds. 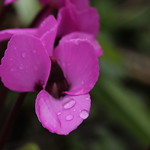 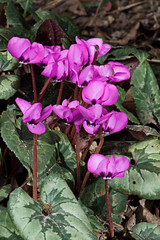