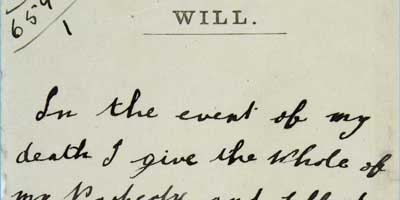 The last wills of 31,000 Scottish soldiers are being made available online on ScotlandsPeople by the National Records of Scotland as part of commemorations of the 100th anniversary of the outbreak of the First World War.

The poignant documents include the last wishes of 26,000 ordinary Scottish soldiers who died in the Great War. Most of them were killed in action, died of wounds or went missing on the Western Front. A smaller number served at Gallipoli, Salonika or in Mesopotamia.

Almost all the wills were written in their pay books by soldiers below the rank of officer, who served in the renowned Scottish infantry and cavalry regiments, as well as in many other British regiments, and all the army corps that were on active service. Also included are a few men who joined the Royal Flying Corps and the RAF.

“These small but powerful documents are a testament to the sacrifice in wartime made by thousands of Scots, not only the soldiers themselves, but also their families and loved ones.”

“We are privileged to be marking the centenary of the start of the First World War by making these remarkable records available. They give us a unique insight into the service of Scottish soldiers during the First and Second World Wars, but also in other conflicts before and since.”

In addition to the wills from the Great War, there are about 4,750 wills of Scots soldiers serving in all theatres during the Second World War, including some women auxiliaries, and several hundred from the Boer War and Korean War, and other conflicts between 1857 and 1965.

The soldiers’ wills were usually found in pay books retrieved on the battlefield, or recorded on forms in Army record offices in Britain, or in the absence of a will, in letters home in which soldiers might mention their last wishes. After the War Office settled the estate of a soldier who died on active service, including entitlements to pay and pension, they sent the Scottish wills to the Commissary Office in Edinburgh, and hence to the National Records of Scotland.

The Soldiers’ Wills are available online through ScotlandsPeople, at the ScotlandsPeople Centre in Edinburgh, and at local family history centres in Glasgow, Kilmarnock, Hawick and Inverness.

Visit the ScotlandsPeople website for stories about people who have made the connection with an ancestor in the Soldier’ Wills.