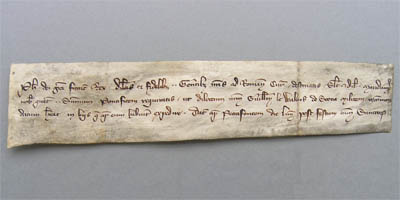 A unique 14th century letter concerning Sir William Wallace, one of the main leaders of the fight against Edward I during the Scottish Wars of Independence and regarded by many as Scotland’s greatest national hero, is to remain in Scotland for a further two years.  The document is currently on loan to National Records of Scotland from The National Archives in London, and the two organisations have reached agreement that the loan will be extended until 2017.

The letter, from King Philip IV of France to his agents in Rome, commands them to assist Wallace in his business before the Pope and is dated 7 November 1300.  It is known that Wallace travelled to the court of Philip IV of France in 1299 in an effort to persuade him to support the Scottish Cause against the English King, Edward I.  The document suggests that Wallace intended to visit the Pope but it is not known whether he reached Rome.

The letter is normally held in The National Archives.  Its age and fragility mean that it can only be put on display for limited periods of time, but it has been displayed in Scotland twice in recent years, in the Scottish Parliament in 2012, and again in 2014 at Stirling Castle.

Jeff James, Chief Executive and Keeper of The National  Archives  said: “We hold a range of records that are part of our shared history across the whole of the British Isles, including Scotland. Making our collection accessible to everyone is a priority and we are delighted to work in partnership with National Records of Scotland.  The loan is a great opportunity to widen access to this important document.”