For You The War Is Over

For You The War Is Over 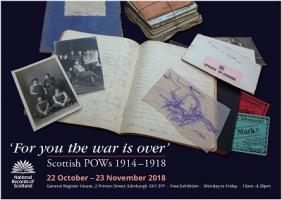 A new exhibition by National Records of Scotland (NRS) reveals previously untold stories of Scottish soldiers who were captured on the battlefields of World War I and imprisoned in Germany.

On display for the first time from Monday 22 October, soldiers’ personal letters and photographs tell their stories from “behind the wire” in their own words, including one soldier’s darkly amusing war diary. Scottish Prisoners of War clashed with their captors and resisted their authority, to make running prison camps as difficult as possible.  Documents and audio recordings of prisoners’ personal testimony take visitors onto the battlefield where they were captured and inside the camps to find out how they continued the struggle against their captors with courage, resilience and humour.

Letters and other documents describe ambitious escape plans, hidden tunnels and a long trip home in a famous general’s personal motor car, while items sent from Scotland show how worried families helped to maintain the men’s morale, their health and their sanity.

Presented in a unique partnership with private archives, "For You The War Is Over" uncovers these inspiring and tragic events to explore the experiences of those who returned home to their families after Armistice Day and those who sadly did not.

Anne Slater, Chief Executive of NRS, said: “Our archivists have created a fascinating snapshot of life in the prison camps of World War One.  Combining specially chosen items from private archives and selected documents from our records, this exhibition shows how the cultural and historical treasures that National Records of Scotland holds and supports can bring Scotland’s past to life”.

Fiona Hyslop, Cabinet Secretary for Culture, Tourism & External Affairs said: “For You The War Is Over is a great chance to find out about this underappreciated aspect of the First World War, in the Centenary year of the Armistice.  It sheds new light upon the experiences of the men who fought and sacrificed so much in this terrible conflict, both on the battlefield and in captivity, one hundred years after their release”.

Free exhibition being held at National Records of Scotland
'For you the war is over': Scottish POWs 1914-1918