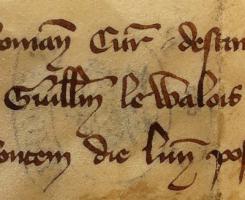 One of only two surviving documents with a personal link to William Wallace is going on display at National Records of Scotland on Edinburgh Doors Open Day, Saturday 29 September 2018.

The event offers a chance to see the 700-year-old parchment letter, last displayed in 2014, which is so old and fragile that it can only be shown rarely and under controlled conditions.

Written in November 1300, the document offers a tantalising glimpse into a mysterious period of Wallace’s career. King Philip IV of France wrote to his agents in Rome, commanding them to ask Pope Boniface VIII to view William Wallace favourably. His business in Rome is not described.

The letter proves Wallace played a role in the turbulent politics of medieval Europe, when the Pope was trying to encourage peace between England and France, and to challenge England’s claim to control Scotland.  Did Wallace, the former Guardian of Scotland, actually undertake a secret diplomatic mission to Rome?

Wallace was eventually betrayed, captured by the English and executed in London in 1305. King Philip’s letter was discovered in the Tower of London in the 1830’s. In 2011 a panel of expert historians and archivists concluded that it was likely to have been in Wallace's possession at some time. It is currently on loan to the National Records of Scotland from The National Archives in London.

Visitors to New Register House will have the chance to view this fascinating document between 10am and 4pm.

Wallace inspired campaigners for women’s suffrage, and Doors Open Day also provides a final chance to learn about their story and to see an amazing selection of original records in our exhibition ‘Malicious Mischief? Women’s Suffrage in Scotland’.

There will also be a display of documents for young visitors; the chance to meet and chat to archivists, conservators and statisticians, to mark the Year of Young People; and guided tours of General Register House and New Register House – places must be booked. Learn more at Doors Open Day. Letter of recommendation by Philip IV to his agents at Rome for William Wallace, 7 November 1300. The National Archives, SC 1/30/81.