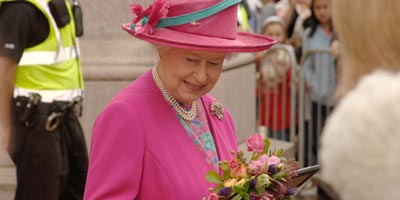 To celebrate the Queen’s 90th birthday we have created a special feature highlighting documents in NRS which chart her relationship with Scotland.

The Queen is a direct descendant of Robert II, King of Scots, on both sides of her family and so enjoys a unique link with Scotland.

The feature includes images of one of her earliest signatures as a new queen in 1952, to her opening of the ScotlandsPeople Centre in General Register House in 2008 (pictured),  as well as some little-known documents  preserved in NRS which illustrate her royal role.

The new feature is one of many on our site which explore the unique photographs and records in our collections. Other new features include one relating to the Battle of Jutland in 1916, and the death of Charles Whitehead Yule, a member of staff in General Register House, who was killed in action one hundred years ago.